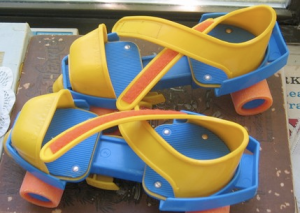 After joining yet another league I am back where I started. I guess I knew this would happen. And technically, I got what I told myself I had initially come for: back into skating shape, and reacquainted with the sport and its rules. Admittedly however I think I was hoping for more. I must have been, in order to reconcile my issues of the past and join a league under someone else’s management. But here I am again, abstaining from the one thing I love most, out of principle. As much as I love skating, I love roller derby more. All I have ever wanted was to improve the future of the sport for skaters and its fans. There is a saying that “roller derby saved my soul”, and for me it couldn’t be more true.

I had always been an academic and artistically geared kid. I thought I knew what a team was because I had been in the marching band, but I did not truly know what a team was until roller derby. In marching band, we were taught to believe we were a team, but if we missed a performance, there were countless other individuals to fill in our parts. In roller derby, you are only as good as your weakest player, and if someone isn’t there, you skate down. It was not until I was 21 and depending on my fellow skaters in a game that the light bulb came on for me: “Ohhh, Team Work”. Not only that, I surprised myself at being good at a sport, damn good! I learned I could be athletic! I was never a straight A student, and I didn’t go to an Ivy league school. I was never first flute and I played in the B Jazz band all 4 years of High School. I was the chubby kid in gymnastics and never outsold my troop mates in cookie sales in girl scouts. My competition civics team didn’t make it past regionals. BUT SKATING IS MINE. I am the BEST at skating. I own that and ain’t NObody gunna take that away from me. It is the one thing that I love most. As I wrote in July 2007, (talk about getting back to basics)

“If you don’t know what I am talking about then this is not for you. I am right about this and there a’int nobody who’s gunna stop me. There are a lot of people who are criticizing me and my ideas and my efforts and want to see something different happen, or want it to go their way. But when it truly comes down to it, I am still the only one who was willing to stand up against the forces of evil from the very beginning. When no one else would support me publicly or stand up for what was right, I risked something I loved in an effort to improve the quality of skating for all my friends. Now the same people want to bad mouth my ideas and tear me down and insist that what I am dreaming of for everyone is “too big” and an impossible dream to achieve. Well all I have to say is that no one supported me before and that didn’t stop me in my efforts so there is no reason why I should listen now. The truth is that unless we do something completely different than what is already being offered, we won’t succeed as a new league at all. In the end, I am the only one who has consistently pushed for something different to happen. If people do not understand that fundamental component of a new league, then I can find support from other girls. We all want to see a change in the future of roller derby. We just need to find a way to agree to disagree.”

Wow. I am stunned by my own ability to repeat the past. My vision for change has been so clear to me for so long that now I am convinced I, and only I can make it happen. I want it too bad. I want it the most. I recently caught the TV documentary Rolling Thunder and it refueled my quest to reshape roller derby with an even fiercer enthusiasm. Many of the skaters from derby’s heyday were quoted saying “I can’t believe I was getting paid to do something I loved!”. Repeatedly the skaters said it was the best years of their lives. I want the opportunity to look back and say these were the best days of MY life. I love playing roller derby so much all I’ve wanted to do for the last 5 years is give the gift of roller derby to others. So much so, that I have repeatedly given up skating on my quest to dream of something bigger. Time and time again I have lost friends who misunderstand my vision and accuse me of being a defector. I am hurt that fellow skaters think my actions stem from anything other than a love for the sport, but no good deed goes unpunished. It’s time for a new wave of roller derby to emerge, and it cannot be stopped. I CANNOT BE STOPPED!!!